Popping up out of nowhere in a closed room full of people has to be better than being a fly on the wall. I have heard people wish they could be a fly. Personally, I would rather be able to walk through walls. The closest I came to pulling it off, I cheated. Decades ago, I was working with a crew installing office furniture in a facility with raised computer floors. One of my coworkers was in a closed room assembling panels. I went into the room adjacent, lifted one of the floor plates, crawled under the wall into his office, and emerged behind him in time to grab him by the ankles when his back was turned. The results were spectacular. His head might have hit the ceiling were it not for my firm grip on his legs.

John 20:26-28
26 Eight days later, his disciples were inside again, and Thomas was with them. Although the doors were locked, Jesus came and stood among them and said, “Peace be with you.”
27 Then he said to Thomas, “Put your finger here, and see my hands; and put out your hand, and place it in my side. Do not disbelieve, but believe.”
28 Thomas answered him, “My Lord and my God!” ESV

Have you ever pondered how Jesus got into the room? I think we can safely eliminate a creep through the computer wiring crawl space as a possibility. A miracle, you say? Fair enough, but “miracle” describes the what, not the how. Even miracles have mechanisms. The text provides clues. “Jesus came” verse 26 states. The Greek word used is erchomai, which means to move or pass along in any direction.[1] This wasn’t a case of Jesus materializing in the room. He moved into an enclosed room with locked doors. Floating through the wall as a ghostly spirit doesn’t fit the record either. Quite to the contrary, Jesus went out of his way to prove His physicality. “Feel the nail marks, Thomas. Put your hand into my side.” His invitation to Thomas was extended to the other disciples as well.

Luke 24:36-42
36 And as they thus spake, Jesus himself stood in the midst of them, and saith unto them, Peace be unto you.
37 But they were terrified and affrighted, and supposed that they had seen a spirit.
38 And he said unto them, Why are ye troubled? and why do thoughts arise in your hearts?
39 Behold my hands and my feet, that it is I myself: handle me, and see; for a spirit hath not flesh and bones, as ye see me have.
40 And when he had thus spoken, he shewed them his hands and his feet.
41 And while they yet believed not for joy, and wondered, he said unto them, Have ye here any meat?
42 And they gave him a piece of a broiled fish, and of an honeycomb. KJV

How can flesh and bones enter a locked, enclosed space? One possibility is a spiritually amplified geometry. To make my point, let me start with points and build from there.

Any point drawn on screen or paper takes up space. This is an unavoidable reality of visual illustration. In the mathematical branch of spatial dimensions, a point is a place—a particular location or position. It has no width, length, or depth. Width, length, or depth gives one the opportunity of movement as they indicate a measure of space. A point is a zero dimensional (0-D) object. It offers no degree of freedom of motion.[2]

Imagine points A and B below each had an inhabitant. Citizen A would have no means of reaching Citizen B and vice versa. As inhabitants of a position only, they would not be able to change locations.

If Citizens A and B happened to live on the outer fringes of Universe Line AB, they would each be able to move along this single dimension, A to B or B to A. Lines only have one degree of freedom of motion. They are 1-D objects.

What if Universe AB was a square? Inhabitants of this universe would only have two degrees of freedom of motion. Citizens A and B would not be restricted to meeting at a place on a singular line. They could interact at any point within the area of their universe.

Let’s continue the thought experiment by expanding the area of Universe AB into a different shape while keeping it a two-dimensional plane.

Citizens A and B are 2-D creatures who only have two degrees of freedom of motion and thus perceive their universe to be a flat surface. Citizen C is a three-dimensional being. He can travel as A and B do or go directly to quadrants I and V because as a 3-D being, he knows that Crossland is really a cube. 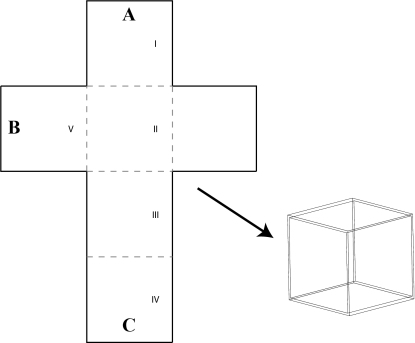 Let’s suppose that Citizens A and B each built a wall and a door closing off their quadrants from quadrant II. Having three degrees of freedom of motion, Citizen C can enter quadrants V and I directly from IV without traveling to quadrant II and then having to knock on either door. Because he can access the third dimension—a spatial dimension that for Citizens A and B does not exist—he can step into their space as if from “nowhere.” From their perspective, Citizen C would have “suddenly appeared.”

From this foundation, we can proceed to consider hypercubes and hyper-dimensional spaces. But before we do, I think it is appropriate to always keep in mind Jesus’s preferred mode of entry.

Revelation 3:20
Behold, I stand at the door, and knock: if any man hear my voice, and open the door, I will come in to him, and will sup with him, and he with me.

Answering the knock is the best way to see Him come in.